In addition to teaching music and chorus to elementary school students, Becky Merges works with students from grade six to 12 as a color guard coach.

Beyond causing devastating damage to the body, cancer often finds its way into every part of a patient’s life, from work to personal relationships to family. No one knows this better than Becky Merges, now 51, a music and chorus teacher at Owego Elementary School in Owego, New York.

Ms. Merges was diagnosed with breast cancer in early 2014; however, her personal experience with the disease goes back many years.

Support groups can be an incredibly important part of dealing with cancer—whether it affects you or a family member or other loved one. UHS recognizes this and offers support groups for the different situations people affected by cancer find themselves in.

The newly-diagnosed patient support group is specific to people active in their cancer treatment. In addition to emotional support, the group discusses strategies for navigating the physical, mental and emotional toll cancer and its treatment can have on
a patient’s life.

The cancer survivor support group helps cancer survivors transition from being unwell into wellness. In addition to discussions with other survivors, the group includes activities such as physical therapy, exercise, journaling, meditation and more.

The children’s support group meets once a month and gives children with loved ones receiving cancer treatment a space to meet and share their feelings. Children also participate in therapeutic activities such as arts and crafts.

“Both of my grandmothers had breast cancer,” says Ms. Merges. “And my best friend also died of breast cancer when she was 37, very young. I was with her when she passed and the one thing she asked me is to keep up on my mammograms.”

Ms. Merges kept her promise and had mammograms regularly starting at age 40. In 2014, about a week before she was due for a mammogram, she felt a lump in her breast.

“But, the next morning, the lump didn’t seem as obvious. We were going on vacation, so I tried not to think about it,” she says. “After I did the first mammogram [a week later], they called me back and would not let me leave the building until I had another and a biopsy. Twenty-four hours later, I received the news that it was fairly aggressive cancer. I was very lucky to catch it so early.”

Support from the Start

Just eight days after her diagnosis, Ms. Merges started receiving treatment and was immediately referred to a nurse navigator. The navigator went through all of UHS’ cancer support services with her. 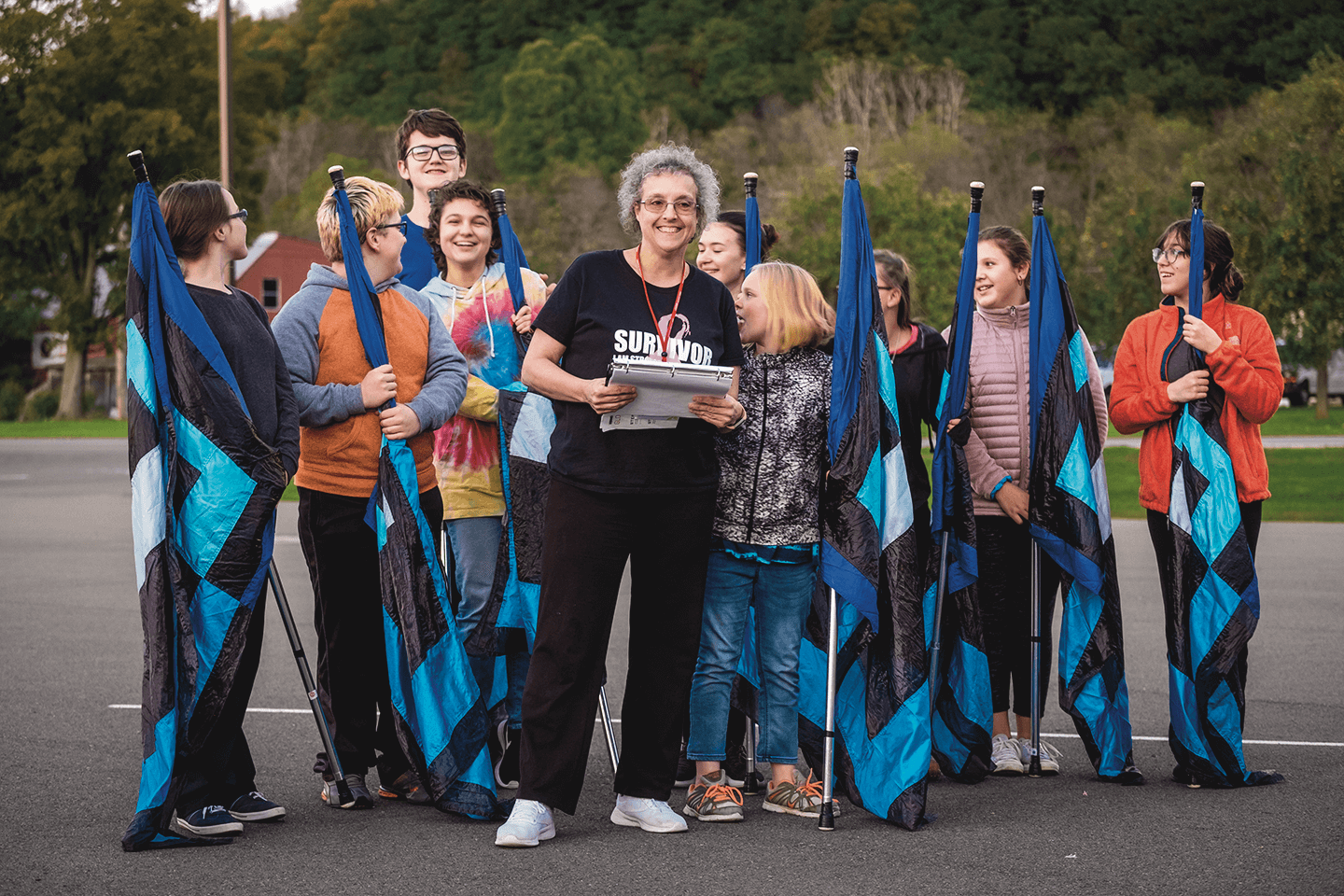 Merges, a cancer survivor, with her Owego Apalachin Central School District color guard as they prepare for a halftime performance.

“I said, ‘Sign me up for everything,’ because we were floundering,” she says. “My husband, my two daughters and I had no idea what to do—at that point it was so new.”

Ms. Merges and her family leaned on UHS’ support network in different ways. One important service that UHS offers is a series of support groups that give cancer patients and their family members and loved ones a place to discuss and find relief for the stress that comes along with a cancer diagnosis.

“I went to the support groups during treatment and there were other people who were behind me and some who were ahead of me in treatment,” she says. “As much as you talk to your family, they don’t go through it and they don’t fully understand.”

One of Ms. Merges’ daughters also attended the children’s support group and still does to this day. In fact, Ms. Merges points to the ongoing availability of support groups and counseling as an important aspect of UHS’ services.

“The fact that I had access to a one-to-one counselor, and I still have access if I need it even though I’m four years out, is amazing,” she says.

“Did You Know” UHS offers a wide range of support services for cancer patients?

UHS Social Worker and Support Group Facilitator Jennifer McCormick, LCSW, who worked with Ms. Merges, agrees that continuing support services, past treatment and through survivorship and returning to a more regular living situation, is key. However, she acknowledges that these services are sometimes underutilized.

“It’s something that people might not recognize is available long-term,” says Ms. McCormick. “[Ms. Merges] and I met regularly for a year after her treatment.”

Although Ms. Merges hasn’t received any treatment since August 2015 and her cancer has been in remission for about three years, she still feels stress related to the experience.

“Even though I’m perfectly healthy now, there are still mental issues,” she says.

“It’s like PTSD—you’re in a life-threatening situation. Every time you have a mammogram you get nervous, and they’re there to talk you through it.”