If you have ever stopped to wonder where the newest crop of healthcare professionals is coming from, you don’t have to look any further than the hospitals in the UHS system. For 25 years, UHS has partnered with the New Visions Program administered by the Board of Cooperative Educational Services (BOCES) to provide an in-depth internship program for high school seniors interested in pursuing healthcare careers.

Students from all area school districts can apply for the program, which has rigorous standards, in February of their junior year. They must submit their grades, an essay and three formal recommendations. Those who pass the first hurdles then meet with an interview panel. Ultimately, 28 students are selected for the New Visions Health Academy each year. There are also four other academies, for Business, Education, Engineering, and Law and Government.

After that sort of application process, it’s clear that this is not a glorified field trip. The students begin orientation in the summer, which includes training on healthcare protocols, patient privacy requirements and professionalism. Maureen Malloy, New Visions Health Academy coordinator for Broome-Tioga BOCES, instructs the students and oversees their progress. “It’s a full-year, college-to-career program,” she says. “After completing summer assignments, the students begin orientation with classroom time when school starts in September. During school, they are in program classes from 8 to 11 a.m. every day.” Once students have been thoroughly grounded in everything from taking blood pressure to how to answer the phone, they begin their rotations. Each student spends two days a week in a different department observing procedures and patient care, and occasionally lending a hand.


“The clinical staff is so phenomenal—they share their experience and expertise with the students. This year students got to see a birth, a life flight transfer and a circumcision. They help roll a patient out at discharge, instead of just sitting in the classroom.” — Rebecca Franco, RN

“They are graded on their coursework and participation,” says Academy coordinator Maureen Malloy, and those grades are reported back to their high schools as well as to the colleges, like SUNY Broome, that grant course credits.

Besides the academic credits, New Visions students might also be able to take advantage of other options for college: The Albany College of Pharmacy and Health Sciences offers a $5,000 scholarship for New Visions students. “They’ve had great success with New Visions students in the past, so they want to reward them,” says Rebecca Franco, RN, New Visions allied health coordinator and teacher at UHS Chenango Memorial Hospital, which partners with the Delaware-Chenango-Madison-Otsego BOCES for their program.

Sonia Nunez, RN, participated in the program in 2013. “My mom works as a dental hygienist, and I always knew I wanted to be in healthcare. I had a friend who did New Visions in the previous year, so I decided to apply.”

“It was awesome to see everything,” she continues. “We saw a teaching autopsy, and were hands-on. I did a rotation with the ambulance and ER, and I saw a patient have wisdom teeth pulled.” Ms. Nunez went into the program thinking that she wanted to have a career in dental surgery. “But every single rotation I went to, there was a nurse, and whenever I wanted to do anything or know anything, the nurse helped me.”

Not surprisingly, Ms. Nunez changed course, pursued a bachelor’s degree in nursing and is now an RN in the observation unit of the UHS Wilson Medical Center ER.

“A lot of our students come back to Chenango,” says Ms. Franco. “Through this experience, they can ask themselves, ‘Can I see myself doing this?’ So often the answer is ‘yes.’ It’s great to see my current students working with my former students!”

Ms. Nunez feels the same way. She works the night shift and sometimes sees the current crop of New Visions students as she heads home in the morning. “I see them in their white coats, they’re so nervous and don’t want to get in anyone’s way.”

New Visions has served as an important pipeline for UHS hospitals. Program participants have returned to work in the hospitals as physicians, nurses, advanced practice providers, radiologic technologists, physical therapists and more. “One of ours is working at the Women’s Health Center,” says Ms. Franco, “and three others have applied to medical school—UHS Chenango Memorial has given them terrific recommendations.”

“The program helped me to be more comfortable,” says Ms. Nunez. “I learned professionalism—how to dress and what to say—so I went into nursing school with those skills.”

At the end of the program year, participants write a 20-page paper and give a 30-minute oral presentation on a topic they are interested in. Hospital staff are invited to be in the audience, along with students’ high school administrators. 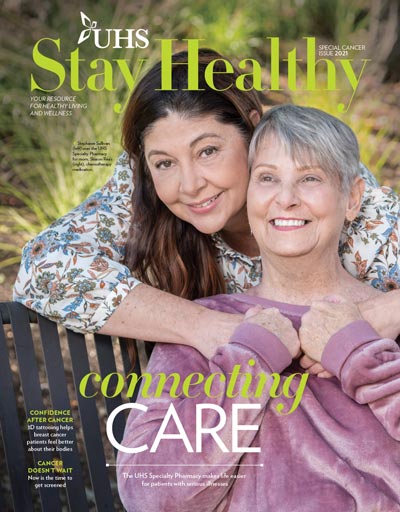