If you’re suffering gastrointestinal (GI) tract issues, you’re not alone! Approximately 70 million Americans suffer some form of digestive condition, many of which are chronic. The American Gastroenterological Association explains that it can be difficult to differentiate between minor vs. major digestive conditions. Hence, patients often downplay the significance of GI symptoms, such as heartburn, indigestion, upset stomach, bloating, pain and bowel issues. “Many symptoms that indicate a serious gastrointestinal tract disease are similar to those that come with more minor issues. So patients sometimes put off checking in with their physician,” says UHS gastroenterologist Atif Saleem, MD. “Every symptom deserves a discussion with your physician — particularly if it’s a chronic issue. There is so much we can now do. At UHS we have the most advanced and safest techniques to diagnose, stage and treat gastrointestinal tract issues — tools that help us treat disorders and cancers at the earliest and most treatable point.” 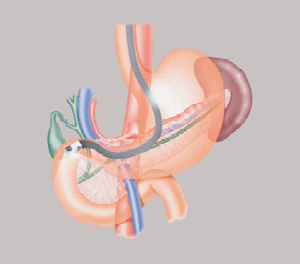 Endoscopic ultrasonography (EUS) allows a gastroenterologist to examine a patient’s esophageal and stomach linings, the walls of the upper and lower GI tract, and organs near the gastrointestinal tract. In addition, EUS helps diagnose diseases of the pancreas, bile duct and gallbladder when other tests are inconclusive or conflicting.

The specialist uses a thin, flexible tube called an endoscope with a built-in miniature ultrasound probe. The endoscope is passed through the mouth or anus to the targeted examination area and sound waves create detailed images of the digestive tract. The results, stresses Dr. Saleem, “are fantastic.”

“For diagnostics, the procedure identifies lesions in the esophagus, stomach and rectum, and when necessary, helps stage a cancer tumor,” Dr. Saleem says. In some patients,Dr. Saleem adds, EUS can also be used to perform a needle biopsy on a lump or lesion. For therapeutic purposes, endoscopic ultrasound-guided drainage can extract fluid collected within or adjacent to the pancreas due to inflammation of the pancreas. 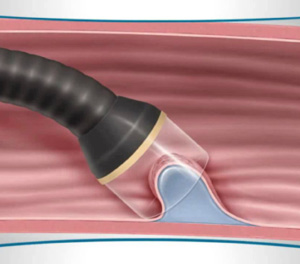 Endoscopic mucosal resection (EMR) is a technique used to diagnose and remove cancerous tissue within the gastrointestinal tract. This procedure is often recommended for patients with suspected early stage cancer or pre-cancerous tissue, such as seen with Barrett’s esophagus.

EMR involves inserting a thin, flexible tube called an endoscope through the mouth and into the esophagus. The endoscope tip has a lens and light source, which delivers images to a monitor for close inspection of the upper gastrointestinal tract’s lining.

An instrument at the tip of the endoscope allows the gastroenterologist to collect small nodules or growths and remove diseased tissue. The procedure can be repeated in nearby areas, aiding in the removal of additional abnormal tissue. A pathologist then evaluates the removed tissue.

Barrett’s esophagus is a potentially serious complication of gastroesophageal reflux disease, commonly called GERD, which occurs when stomach acid or content flows back into the esophagus. The backwash, called reflux, irritates the lining of your esophagus.

Over time, GERD may cause healthy tissue that lines the esophagus to harden. When this happens, Barrett’s esophagus may result. There are no new or unique symptoms directly linked to Barrett’s. However, the condition does carry a slightly higher risk of developing esophageal cancer — a potentially-deadly disease. 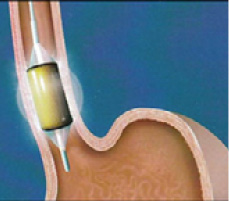 Radiofrequency ablation (RFA) is a highly regarded and reliable procedure to successfully eradicate Barrett’s. “Today it’s the standard approach for patients with Barrett’s esophagus,” says Dr. Saleem. “The procedure is safe and the outcomes are great.”

With the patient sedated, a thin, flexible tube is inserted through the patient’s mouth and into the esophagus. A controlled, one-second pulse of radiofrequency energy acts to remove a thin layer of diseased esophageal tissue while preserving healthy tissue.

All three procedures — endoscopic ultrasonography, endoscopic mucosal resection, and radiofrequency ablation for the treatment of Barrett’s — are non-invasive and safe alternatives to surgery used to diagnose, stage and treat GI tract cancers and disorders.

“These procedures are relatively simple and patients return home the same day. There is no hospitalization and discomfort can be treated with over-the-counter pain relievers.”

Dr. Saleem notes. “With EUS and EMR, patients are discharged within an hour of the procedure. Radiofrequency ablation for the treatment of Barrett’s requires about two hours in recovery, due to the sedation, but then patients head home. And because of a long, successful history behind these techniques, procedural risks are less than 10 percent. We’re talking about uneventful recoveries, but results that ultimately save lives.”

True to his heritage, 72-year-old Paul Tierno has always enjoyed fresh pasta smothered in rich Italian marinara sauce. Although the acidic tomatoes and assorted spices aggravated his gastroesophageal reflux disease (GERD) — and the symptomatic heartburn — he continued to indulge.

Both treatments were uneventful, Mr. Tierno says. “I always knew what was going on and what to expect. Everyone was great.”