After a bilateral shoulder replacement, Nancy Deckner is back to her usual self and continuing to exercise as part of her physical therapy treatment.

When Nancy Deckner, a 58-year-old resident of Vestal, New York, initially started having trouble moving her arms, she figured it was a natural result of aging. She estimates she spent 10 years dealing with issues such as having trouble pouring a glass of water for herself or rolling over while sleeping at night and having her shoulder make a “sound like thunder.” However in early 2018, while meeting with Micah Lissy, MD, orthopedic surgeon and sports medicine specialist at UHS, about a knee problem, she mentioned her shoulder issues and Dr. Lissy called up an X-ray of her shoulder. After reviewing it, he introduced Ms. Deckner to his colleague Woodley Desir, MD, an orthopedic surgeon with a subspecialty in shoulder surgery at UHS. 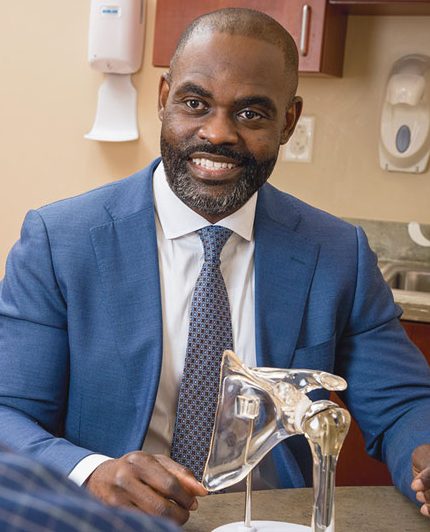 Dr. Desir examined Ms. Deckner’s right arm—her dominant arm—and determined she had bone spurs that were causing pain and limiting the physical actions she could perform. “He recommended a new technique and said I would wake up in the recovery room with no pain,” says Ms. Deckner. “I said, ‘We’ll see about that,’ and when I woke up from the surgery I had literally no pain. I was overjoyed.”

Dr. Desir is able to achieve consistent positive results for shoulder patients, like he did with Ms. Deckner as well as dozens of other patients—he estimates he does about 100 shoulder procedures in a year—because of his experience with and knowledge of shoulder procedures and how they have evolved over the past decade. He is also one of the only fellowship-trained shoulder surgeons in the Southern Tier.

One of the most important aspects of the advanced shoulder replacement procedures that Woodley Desir, MD, orthopedic surgeon with a subspecialty in shoulder surgery at UHS, uses is the minimization of pain during procedures. This is not only because he has the option to use minimally invasive techniques, but also because of his approach to pain relief.

“There are two ways to offer pain relief,” he says. “Traditionally we would do a nerve block, which completely blocks the nerve from sending a pain signal. However this only lasts 18 hours, and when it wears off, the nerve can become hyperreactive, causing additional pain. What I do is inject the pain reliever into the local muscle tissue that will be affected during a procedure prior to the procedure. That decreases the likelihood of pain, and also the local medicine tends to stay longer in the tissue, anywhere from three to five days.”

“Shoulder surgery has changed tremendously in the past 10 years,” explains Dr. Desir. “The procedures we use now are less invasive, and by being a shoulder specialist I have a lot of options when I’m working with patients.”

Some of these newer, less invasive options include stemless shoulder replacements, which use a smaller implant that doesn’t have the traditionally-used long metal stem. This preserves more of the patient’s bone and makes for a faster recovery. Additionally, Dr. Desir can also perform a resurfacing shoulder replacement, which he describes as even less invasive than a stemless replacement, preserving more bone and allowing patients to maintain their normal activities.

“If you’re someone who enjoys weightlifting, or heavy lifting is involved in your work, with a resurfacing replacement you can return to those activities without any restrictions,” he says.

If it fits the patient’s needs, Dr. Desir can also perform a total shoulder replacement or a reverse shoulder replacement, which are similar procedures that differ in where the replacement connects to the patient’s bones. “I customize the treatment for each patient,” says Dr. Desir. “First we get a CT scan, and we also have the option to do a 3D reformation where I can view a 3D image of the shoulder itself. I use this to determine what is the best implant for the patient’s body, and I can also practice the surgery using the 3D model. It allows for very precise procedures and good patient outcomes.”

The ability to customize treatments for specific patient needs played an important role in the successful surgery of another of Dr. Desir’s patients, Nancy Young, a 72-year-old resident of Otego, New York. She experienced excruciating shoulder pain to the point where she lost 15 to 20 pounds because of how difficult it was for her to do even basic things such as eating. Ms. Young also has severe arthritis and Parkinson’s disease, which made treating her shoulder problems complicated. 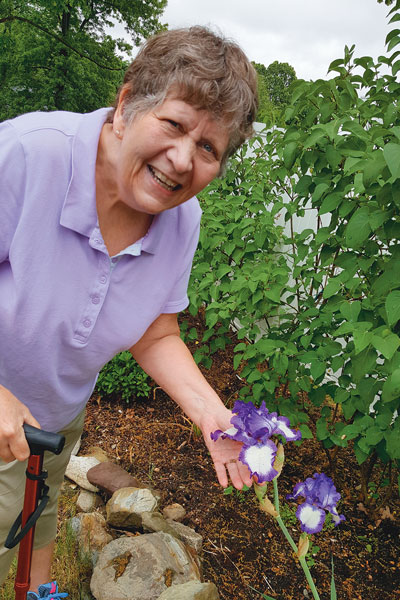 After a reverse shoulder replacement, Nancy Young is back to doing the things she loves, including gardening.

Ms. Young received steroid injections to help with the pain and arthritis, but by late 2018 the injections were less and less effective. After having difficulty finding a surgeon who could perform a shoulder procedure for her, she was referred to Dr. Desir, who performed a reverse shoulder replacement in November 2018.

“Any questions I had, he would take his time and not rush to tell me what was going on,” says Ms. Young. “And he didn’t end up doing a typical shoulder replacement because he did research on effective shoulder treatments for someone with Parkinson’s. He wanted to make sure he did something that was going to stick.”

And nine months later, that treatment has stuck. Ms. Young says she didn’t feel any pain from the surgery from the beginning. “I had therapy at my house and I just fell right into it, no pain at all,” she says. Not only did this allow Ms. Young to get back to her normal, day-to-day activities, but it also helped her get back to her hobbies like gardening and feeding the birds and chipmunks at her riverfront home.

“They have a ton of wildlife, and with her shoulder the way it was, she couldn’t do many of those simple things like birdwatching or feeding the animals,” says Michelle Edelstein, Ms. Young’s daughter who regularly travels from her home in Boston to visit her parents and attend checkups with her mother. “Dr. Desir gave my mom back her quality of life, and that’s an amazing thing.”

Dr. Desir notes that shoulder pain is very common because the shoulder is one of the body’s most used joints. Shoulder pain that requires medical intervention can occur due to a sudden trauma, but more often than not, it is a result of natural degeneration from extended use. This was the case for Ms. Deckner’s right arm, and little did she know that when she visited Dr. Desir for follow-up about two months after her surgery, he would find she had a similar problem with her left arm. 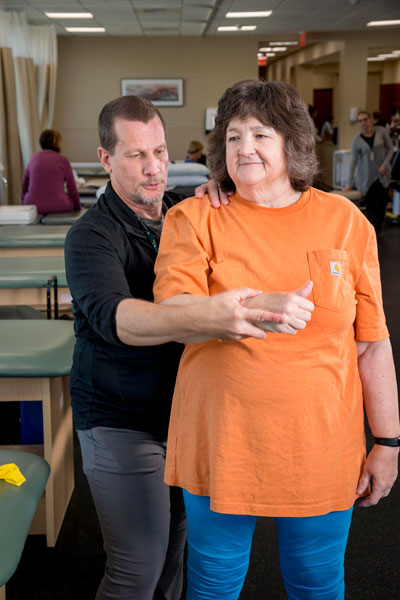 “My left shoulder would be exhausted and I thought it was because I was doing more with my left arm while I did recovery on my right arm,” says Ms. Deckner. “Dr. Desir did the same test on my left shoulder as he did on my right and he said, ‘This one needs to be replaced too.’”

In order to ensure that her right shoulder healed properly, Dr. Desir recommended they wait about six months before doing the left arm, and then in March he performed another shoulder replacement on her left arm. Ms. Deckner says the recovery went even better the second time, as she was more familiar with the process.

Almost six months out from her bilateral shoulder replacement, Ms. Deckner’s right arm is better than it has been in years and her left arm is catching up. She is most happy about the simple things: being able to pour a glass of water for herself again without spilling or reach behind her back to put on clothes. “The motion is amazing,” she says, “and during physical therapy it feels so good to be able to move your arm everywhere someone asks you to.”

Performing dozens of shoulder procedures every year, Dr. Desir says these kinds of results are typical for his patients and he is always trying to give the best, most individualized care possible. For people who have shoulder pain, but aren’t sure if it rises to the level of requiring surgery, he says, “If you have pain that lasts more than two weeks, it’s time for you to see a healthcare provider.” From there you can work with your provider to determine if taking a trip to Dr. Desir’s office could benefit you the way it has Ms. Deckner and Ms. Young.

For more information on orthopedics and sports medicine at UHS, visit nyuhs.org. 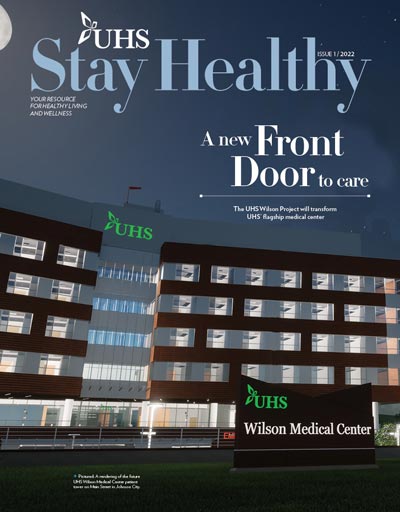